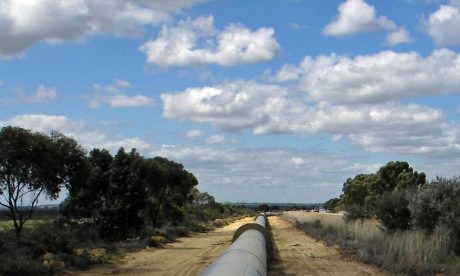 Threats to energy infrastructure occur at all scales, from individual acts of crime, sabotage, or terrorism, up to major regional wars. The MENA region is particularly crucial to the world economy because of the large volumes of oil and gas that flow from and through it. Though some authors point out that energy attracts only a small share of terrorist attacks, recent trends suggest a sharp rise in terrorist attacks related to oil and gas. The Energy Information Administration (EIA) has identified a number of global “chokepoints” that control world energy transit. These are geographically-constrained routes, potentially vulnerable to disruption, that carry large volumes of oil, gas, or both (as well as other trade). Of these chokepoints, four occur within the broader MENA region: the Strait of Hormuz at the exit of the Persian Gulf, the Bab el-Mandab at the southern entrance to the Red Sea, the Suez Canal and SUMED pipeline linking the Red Sea and Mediterranean; and the Bosporus linking the Black Sea and Mediterranean.