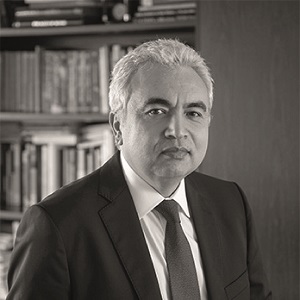 Fatih Birol took office as IEA Executive Director on 1 September 2015, twenty years after first joining the Agency. Previously, He held the position of Chief Economist, with responsibility for directing the flagship World Energy Outlook publication. He is also the founder and chair of the IEA Energy Business Council. Fatih Birol has been named by “Forbes Magazine” as one of the most influential people on the world’s energy scene. He chairs the World Economic Forum’s (Davos) Energy Advisory Board and serves on the UN Secretary General’s Advisory Board on ‘Sustainable Energy for All’. He is the recipient of numerous awards from government, industry and academia. Prior to joining the IEA, he worked at the Organisation of the Petroleum Exporting Countries (OPEC) in Vienna.  In 2013 Fatih Birol was awarded a Doctorate of Science honoris causa from Imperial College London.