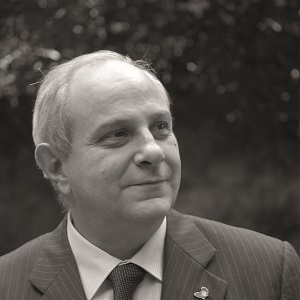 Mario Giro was appointed Deputy Minister of Foreign Affairs with an International Cooperation portfolio in January 2016. He joined the Community of Sant’Egidio in 1975. In the mid-1980s he worked in support of inter-faith dialogue, particularly with the Muslim world. He has been involved in developing the Community of Sant’Egidio in Africa since 1989.  In charge of the Community’s international relations and peace mediation activities since the early 1990s, he was appointed Head of International Relations in 1998 and has been involved in various mediation processes. He received the Foundation Chirac Award for Conflict Preventive in 2010. Mario Giro was Advisor to the Minister for International Cooperation and Integration in 2012, and organised the International Cooperation Forum in Milan that led Italy to reinvest in the Sahel region and outline the institutional future of cooperation. In 2013 he was appointed Under Secretary of Foreign Affairs holding the remit for the countries of Latin and Central America and Southern Africa and for the promotion of the Italian language and culture. In February 2014 he was confirmed in his position by the Renzi government.