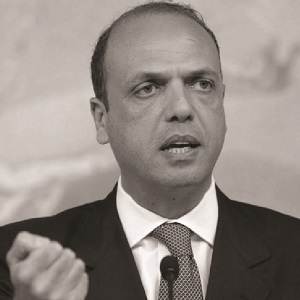 Angelino Alfano has been Minister of Foreign Affairs and International Cooperation since December 2016. He chaired the “Forza Italia” parliamentary group at the Sicilian Regional Assembly (1998-2001). In 2001 he was elected to the Italian Parliament in the list of “Forza Italia”. In 2002 he was appointed Executive Member of Forza Italia’s National Department for Policies for the South of Italy, and Regional Coordinator of “Forza Italia” for the Region of Sicily (2005). In 2006 he was re-elected to Deputy in the Italian Chamber of Deputies, and in May 2008 he was appointed Minister of Justice. In July 2011 he was elected National Political Secretary of the “Popolo della Liberta” (PDL) Party, and in February 2013 he was re-elected Member of Parliament for PDL. He was appointed Minister of the Interior and Deputy Chairman of the Council of Ministers (April 2013-February 2014). In November 2013 he founded and was elected Leader of a new political party “Nuovo Centro destra” (“New Centre Right”). Between 2014 and 2016 he served as Minister of the Interior in the Renzi government.