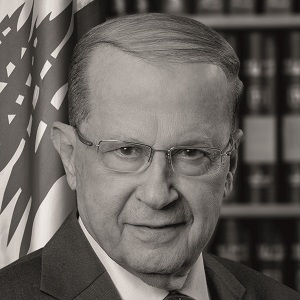 Michel Aoun served as an Artillery Officer in the Lebanese Army. He studied at Fort Sill in the US and at the Ecole Supérieure de Guerre in France. From June 1984 to November 1989 he was General of the Lebanese Armed Forces (LAF). From September 1988 to October 1990 he served as Prime Minister after being appointed by the then departing Lebanese President Amine Gemayel as Head of the Lebanese government ad interim, while maintaining his position as Commander of the Lebanese Army. In March 1989 Michel Aoun declared War against Syrian forces in Lebanon. On 13 October 1990 he left the Baabda presidential palace under heavy Syrian air bombardment and departed to France. In May 2005, after he returned to Lebanon, he established the Free Patriotic Movement (FPM). Since 2005 he has been President of the CPL. In May 2005 he was elected Deputy. The newly formed party, the CPL, got 21 seats in Parliament. In February 2006 he reached a political agreement with Hezbollah, and in June 2015 signed a Statement of Intent with Samir Geagea, leader of the Forces Libanaises (FL). In October 2016 he was appointed President of the Lebanese Republic.