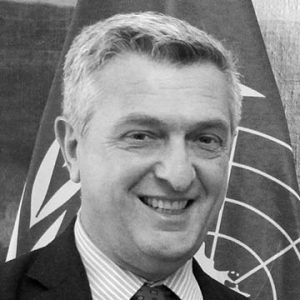 Filippo Grandi is the 11th United Nations High Commissioner for Refugees. He was elected by the UN General Assembly on 1 January 2016 to serve a five-year term, until 31 December 2020. He has been engaged in refugee and humanitarian work for more than 30 years. From 2010 to 2014 he served as Commissioner-General of UNRWA, the UN Agency for Palestine refugees, having previously been its Deputy Commissioner-General since 2005. He also served as Deputy Special Representative of the UN Secretary-General in Afghanistan and has worked with NGOs and UNHCR in Africa, Asia, the Middle East and at the UN’s Geneva headquarters.