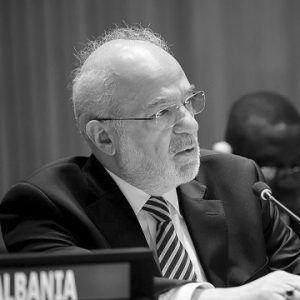 Ibrahim Al-Jaafari is Iraq’s Minister of Foreign Affairs and Chairman of  the Iraqi National Alliance. In 1980 he was elected as a member of the Islamic Dawa Party. In 1982 he participated in founding the Islamic Supreme Council of Iraq. In 2003 he returned to Iraq, where he was appointed President of the Governing Council and established a 25-member committee to write the new constitution. In 2004 Ibrahim Al-Jaafari was nominated Vice President of Iraq and in 2005 he became its first elected Prime Minister. On 31 May 2008 he launched a new political party, the National Reform Trend, which participated in the first provincial elections in 2009. In 2010 he was appointed President of the Iraqi National Alliance. He was a member of the Iraqi House of Representatives for two terms, from 2006 to 2010 and from 2010 to 2014, when he was appointed Minister of Foreign Affairs.