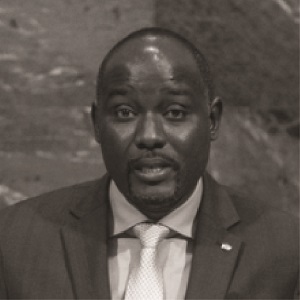 Ibrahim Yacoubou is a Nigerien politician who has served as Minister of Foreign Affairs and International Cooperation since 2016. He leads the Nigerien Patriotic Movement. He was General Rapporteur of the National Advisory Council, set up by the junta that ousted Tandja, in the 2010-2011 transitional period. As a member of the ruling Nigerien Party for Democracy and Socialism (PNDS), he was appointed to the government as Minister of Transport in April 2012 and then moved to the post of Deputy Director of the Cabinet of President Mahamadou Issoufou in September 2013. On 8 November 2015 Ibrahim Yacoubou launched a new party, the Nigerien Patriotic Movement (MPN). He stood as the MPN’s candidate in the February 2016 presidential election. He supported President Issoufou re-election in 2016, during the second round elections.